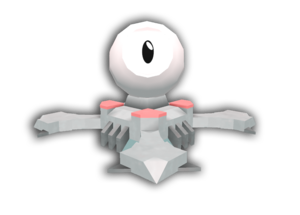 A customizable monster from another dimension. Hunts and kills nearby players.

These hideous creatures only have one vulnerability: Their eye! Jump on it to bounce high!

It can fly and pass through any type of block, and will try to attack any player, Hovercraft or Hamster-Wheel in its range zone. It's a very dangerous mob. It can only stopped by players' weapons and vehicles. Each hit deals ~55 damage, but this amount varies between each weapon.

If a team color is selected, the oculus will only kill the players on any opposing team.

Its appearance is built around a gigantic eye with white pupils. It can change to a yellow, green, red or blue eye depending on the team setting.

In the past the Oculus had a red eye and couldn't be on any team.

In the past the Oculus was not for free and you needed to buy it.