Control Point is a map fully made by NaKYaG in the Live server. It was released a week before the Logic Contest and its last update was in September 9th. It was highlighted as the Game of the Week #230!

This project has been translated into English so more people are able to play it. 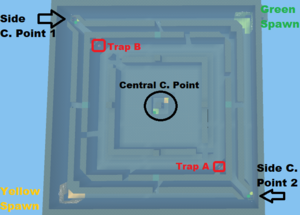 Top view of the map. You can see where you spawn and where you must get.

The territory has a square shape. You spawn in a corner. In two of the corners and the center there are one of the 3 points you must "conquer". You'll see a pressure plate from your team's color and the other team's color. The objective is to press the plate until it reaches 00 and repeat it in all the plates. It counts a number down per second. When you finish with que conquering, some cubes below the other team will disappear for showing a flag of your team's color (That's made for discouraging camping). While you have to do this, enemies will try to stop you with weapons (and you're going to stop them also).

A good strategy would be to know to sneak for counting down without being attacked early; and getting teammates for healing is also helpful. The main objective is NOT to kill a lot. Time also counts. 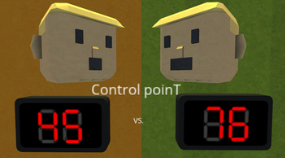