From Kogama Wiki
Jump to: navigation, search
This article is a stub. You can help Kogama Wiki by expanding it. 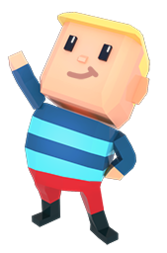 Blockboy is the mascot of KoGaMa, and is used in their logo. He is one of the default avatars, and is also the Tourist avatar.

Blockboy appears to be a young boy, although his age is unknown. He has a wide body, a large square head, blond hair, and black rectangles for eyes. His attire is a blue striped shirt, red pants, and black shoes.

Blockboy on promotional pictures is portrayed as happy and outgoing. He is also portrayed as physically active. He has a variety of hobbies, such as playing sports and reading books.

Blockboy, on promotional images, is seen to be friends with the other characters. However, it is implied that Sword Girl, the default female character, is his best friend.